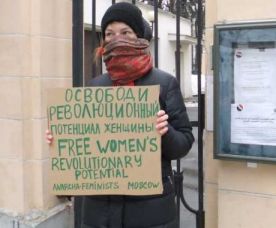 Anarcha-feminists came today, 12 February 2013, to the embassy of Egypt in Moscow to express solidarity with the victims of sexual assault/violence that took place throughout Egypt during the revolution and even after the revolution, when the Muslim Brotherhood came to power.

We don’t have any illusions about the Egyptian government and we don’t ask it to protect demonstrators, who are actually protesting against the system.

We appeal to the demonstrators, to the people, who came out onto the streets in order to fight for justice and a better life. Women are half of society. They double the voices on the streets! Women will strengthen this movement; if you say “no” to medieval customs and let women become your comrades in the struggle!

Raping is inappropriate and unacceptable. It doesn’t matter if it is your comrade or just a woman on the street. Rapists are the same as the pigs of the regime. Islamic patriarchal supremacy means enslaving women. The Muslim Brotherhood wants to keep women as slaves in the kitchen. They want liberty only for heterosexual men. That’s neither fair nor human. If you liberate only one part of society, it won’t be liberation; it’ll be discrimination and terror. A woman isn’t an object, she isn’t a doll or a slave, she isn’t a cook or a housekeeper, she doesn’t belong to you. No-one can decide what should she do with her body and her life.

A society built on hierarchy and discrimination can’t be fair. Real changes are possible only if you start respecting yourselves and the people around you. Liberation is about mutual aid and solidarity.

Only by consolidating their forces will people be able to depose all the tyrants and oppressors.

That’s why we say:

“Free the revolutionary potential of a woman!

Woman is a comrade, not a devil!