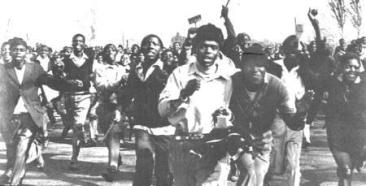 his is a 1979 Situationist-influenced text describing the mass student and worker protests that, in 1976 and 1977, shook apartheid South Africa with mass protests and general strikes. Written by two exiled black South Africans — Norman Abraham and Selby Semela, a leading figure in “76” — and an American revolutionary — Sam Thompson — the text is critical of heirarchical, nationalist and vanguardist modes of struggle, and affirms, instead, “the real black proletarian struggle in South Africa”. We do not endorse its every word, but we are republishing it, in honour of Semela who recently passed away, and to help recover and draw attention to the long, rich history of libertarian, class-stuggle socialist currents in Africa.

END_OF_DOCUMENT_TOKEN_TO_BE_REPLACED

The talk that I’m going to present today is based on a research project that I carried out with my colleague Vladislav Kruchinsky in South Africa in 2011-2013. The aim of our research was to analyse and explore the methods and practices of self-organisation from below that existed in the crucial 1980s period of the anti-apartheid struggle.

The vast majority of the material that’s written about that period of struggle is devoted to the role of the large, institutionalised anti-apartheid forces, such as the United Democratic Front, an umbrella body for the community-based anti-apartheid organisations including church and sports groups, which was formed in 1983. A large part of it also focuses on the African National Congress, which is presented in the dominant narrative of the ANC as the leader of the anti-apartheid struggle.

My aim, with Vlad, was to look beyond these big organisations, and to focus on communities’ struggles, viewed through ordinary people’s stories. When we started our research, we understood that we wanted first-hand information, from the participants in the struggles. This is social history, meaning that it looks at the view from below, with the people interviewed themselves active participants in the stories they tell. We conducted extensive interviews with active members of the communities, township residents, from those days. We hope to finish this project with a book, which will be a compilation of the interviews.

END_OF_DOCUMENT_TOKEN_TO_BE_REPLACED

A sharp increase in fuel prices on Wednesday 6 September will hit the working class and poor hardest. The official reasons for the price hike are rising crude oil costs and the weak Rand. Government tax is also rising. Energy Minister Mamoloko Kubayi claims 4.6 cents a litre will go towards salary increases for petrol station workers.

The reality is rising prices get passed directly onto ordinary people by, for example, increases in taxi fares and food prices.

END_OF_DOCUMENT_TOKEN_TO_BE_REPLACED

The Brazilian Anarchist Coordination repudiates the cowardly criminalization of South African fighters and social fighters and their persecution.

In February 2015, four community members were sentenced to 16 years in prison for participating in a protest in their community. After a brief period of provisional release, two of the four militants were again sent to jail on June 19, 2017.

On February 6, 2016, Papi Tobias, the father of three children and a community leader struggling for housing and social rights in his community, disappeared as he went out to watch a football game at a bar. He was seen leaving a bar in the presence of the local police commander, Jan Scheepers. He is missing until today.

The South African ruling class has often used criminal laws and expeditions from the apartheid era to condemn the black and poor working class and criminalize the activities of militants and social fighters.

As in Brazil (Rafael Braga and many others cases), the ruling class in South Africa uses the justice system and its racist armed apparatus to promote the criminalization of poverty, protest and racism.

The continuity between state terrorism and its apparatuses continues regardless of the government it assumes, in South Africa or in Brazil!

Freedom for Dinah and Sipho!
Justice for Papi!

Faced with the repression that is unleashed against the South African people, from
Uruguay we demand justice and the immediate freedom for the comrades of Boiketlong
and the immediate appearance of Papi Tobias alive, of course.

We hold the South African government responsible for the lives and physical integrity
of our comrades and demand the cessation of repression of the South African people’s
movement, which remind us of the darkest years of apartheid and the military
dictatorships that ravaged the Southern Cone of America.

In several areas of the world, the criminalization of poverty and protest is increasing as
neo-liberal policies that condemnmillions of human beings to hunger and despair.
In Africa and Latin America, the Resistance lives and develops itself in the struggle of
the people !!

Justice for our comrades !!
Down with repression !!
Arriba los que luchan!!

The labour movement has been unable to de-link itself from its archenemy: capital. As its structures bureaucratise, as its leaders become career unionists, as it opens investment companies and pays staff increasingly inequitable salaries, it increasingly mirrors the very thing it is fighting. If the South African Federation of Trade Unions is to meet its promise, it must be fundamentally different from the organisation it was born out of.

END_OF_DOCUMENT_TOKEN_TO_BE_REPLACED

Cde Kusta’s untimely demise is a great loss. It will be felt by all those who were lucky to cross paths with him and all those who got to hear his music. He never questioned or withdrew his commitment to the struggle for freedom and justice, for a world with less political, economic, and gender based oppression.