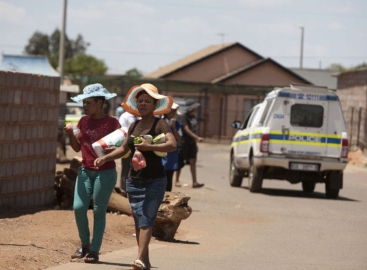 Across South Africa, municipalities are in crisis. They are under-funded, anti-working class, anti-poor and anti-township, and riddled with corruption by elites. The working class is oppressed by the state – as well as the private bosses – and we say “Enough is Enough!”

We need to build an alternative: organs of counter-power, which can demand changes and lay the foundations for a deep redistribution of wealth and power to the mass of the people: the working class and poor.

Across South Africa, municipalities are in crisis. They are under-funded, anti-working class, anti-poor and anti-township, and riddled with corruption by elites. The working class is oppressed by the state – as well as the private bosses – and we say “Enough is Enough!” We need to build an alternative: organs of counter-power, which can demand changes and lay the foundations for a deep redistribution of wealth and power to the mass of the people: the working class and poor.

Post-apartheid municipalities are intended, on paper, to realise human rights through providing basic services, like electricity, sanitation and water. They are meant to involve the public in decision-making and budgetary planning through methods like imbizos, community meetings, ward councilor meetings and Integrated Development Plans (IDPs).

In reality, the local arm of the state is extremely inefficient and fails dismally to fulfil its stated purposes. Basic services, especially in the townships, are a disaster. The local state is not about upgrading working class lives. It is a contested site of power, used by rival groups in the local ruling elite to exploit people and extract resources, including through corrupt tenders. Meaningful participation in municipal processes is a lie.

THE MERAFONG MESS: KHUTSONG SUFFERS
Merafong City Local Municipality in the West Rand District of Gauteng province is a perfect example. Merafong is the largest of three municipalities in the district, making up almost half of its geographical area, and centred on Carletonville, an old mining town. Under executive mayor Maphefo Mogale-Letsie of the ruling African National Congress (ANC), the municipality’s townships have been in turmoil.

Shockingly bad delivery of basic services has become the norm in Khutsong, a high-unemployment, black working class township. Community members are very angry, and there is a long list of grievances. We, in the township, are affected in all areas of life: poor roads, lack of infrastructure, constant water cuts compounded by failing sewage systems, illegal dumping and a lack of refuse collection, ongoing power blackouts, and terribly built low-cost “RDP” government houses. Water leaks from collapsing infrastructure have even led to sinkholes, the largest of which destroyed five houses.

CORRUPTION AND ELITE WEALTH ACCUMULATION
The local municipality is plagued with corruption, and this has had a serious effect on service delivery. Those elected into key municipal positions pursue their selfish class interests, always at the expense of the working class. The main methods used are control over council funds by the elite, and the (often corrupt) outsourcing of municipal services to cronies.

In 2014, for example, the mayor rejected calls by her own party, the ANC, for an investigation into 21 dodgy tender awards, amounting to millions of rands, including R22 million for revamping the municipal website “at a time the municipality was struggling to provide services to ratepayers, including replacing ailing infrastructure.”[1] Two years later, the mayoral offices were upgraded, and a luxury car bought, without following correct processes and at a time of disastrous conditions in Khutsong. [2] Money for repairing the sinkholes seems to have been diverted, with no repairs in sight.

Merafong was one of the municipalities involved in the VBS banking scandal. Municipalities moved their accounts to the VBS Mutual Bank, in return for payments to senior municipal officials, following which the money was embezzled by the bank managers in one of the largest banking scams in South African history. As of 31 March 2018, Merafong municipality had over R50 million rand in VBS. That money is effectively gone, as the bank collapsed in a public uproar that exposed serious wrongdoing by chiefs and ANC and Economic Freedom Fighters (EFF) leaders.

MALADMINISTRATION AND BANKRUPTCY
Coupled to corruption is maladministration: the rot begins at the very top with the mayor. Political party loyalty, rather than skills or hard work, determine appointments, in a system where people get jobs in return for support. By October 2018, Merafong municipality was in debt to a staggering half-a-billion rands, including around R155 million to ESKOM and around R314 million to other creditors. [3] Municipal workers protested as salaries went unpaid in September, [4] while Khutsong underwent protests and road blockades.

On top of this, local municipalities are underfunded. Under neo-liberalism, the budget allocation from national to local government to deliver services has been cut. The number of people in urban areas is rapidly growing, and the need for money has also increased as municipalities are expected to upgrade townships to address the apartheid legacy.

However, there has been a 85% decrease in inter-government transfers to local government from 1991.[5] Up to 90% of local government revenues have to be generated locally, usually meaning higher charges and more cut-offs, cutting costs through methods poor maintenance, outsourcing and casual workers, and other neo-liberal methods, like commercialising municipal operations.

The toxic mixture of corruption, incompetence and neo-liberalism means that many municipalities underspend monies they do have, and fail to collect subsidies from central government they could have, as they run so badly [6] and are so focused on local elite interests.

THE PARTICIPATION MYTH
This situation has been happening for years on end, with no development in sight in Khutsong. Surely community members deserve the right to a clean and healthy environment, to decent living conditions and sustainable jobs? The system in place has not only robbed us of dignity, but has left our neighborhoods unbearable, with sinkholes, failed storm water drains and sewerage leaks, along with an ever-growing unemployment rate and spreading squatter camps.

Municipal governments are only obliged to “consult” the public, that is, to hear their views. The actual decisions are made by the municipal leadership.[7] No decisions come to the people for checking, and decisions cannot be reversed. Other methods are used to gut the consultation processes as well: inaccurate reporting, use of English for complex documents, withholding information including audits and reports, meetings at inconvenient times and so on.

FROM STATE POWER TO COUNTER-POWER
The problems cannot be fixed by the state. Despite all the promises on paper, service delivery does not align with the local government’s ruling elites’ interests: they are dependent on votes, but not controlled by the voters.

The state, at all levels, is an authoritarian pyramid of power, which provides no space for the working class and poor to participate in any positive way. Power is centralised in the hands of a few, who can then make decisions in their own class interests. The only group outside the municipality that this political elite will pay attention are the bigger private capitalists, the economic elite. Such a system is ripe for corruption, and, even when money is short, or administration bad, it focuses on elite interests.

The real solution is mass organising, creating what we anarchists call counter-power. This, at the municipal level, means building outside and against the state: from street committee to block committee to ward committee, and upwards, based on meetings and delegates under strict mandates.

Instead of the working class communities being involved in the empty “participatory” processes of the municipalities, which are controlled by elites, we want a bottom-up process controlled by the working class and poor, on issues that affect the township. This means gatherings based on real participation, where the working class public itself is the core of all decision-making, and where all key decisions are passed by those affected through democratic processes. Discussions must be at convenient meeting and at times, like weekends or public holidays that enable participation by community members.

DEMANDS AND TRANSITION
It is essential that these organs of popular organising develop into a “counter-power,” that is, into bodies that can fight, from below, for improvements now but that can also, in the future, actually take over local governance. That does not mean making them into a copy of the municipality: it means building an alternative, decentralised system of bottom-up democracy, from the street upwards, which will run the services and develop the areas according to decisions and planning from below, based on common ownership.

The reality is that the system cannot deliver. To build counter-power, we need to be willing to organise protests, and we must always run education. At the same time, our demands should make sure we can operate at a distance from the state, autonomously, rather than get dependent on the politicians. A concrete example of how we can do this is to demand building materials and build our own houses, where we choose, rather than demand RDP houses, built at low quality by local capitalists, far from work.

In building counter-power, it might be useful to attend the various municipal meetings, imbizos, and so on held by the authorities. Grievances can be raised, and demands made for access to audits and information, including in local languages. We must demand transparency and the release of forensic reports of municipal accounts, and if this is refused, it exposes the true nature of the system. But this does not mean pretending these municipal give us a real say – just using the platform to confront the authorities and highlight the backlogs and corruption, building our movements.

Most importantly, this is a call for mass organisation in the community, for us to start building our own structures outside and against the state – and to fight and struggle for ourselves as the working class community of Khutsong, rather than trust the parties.