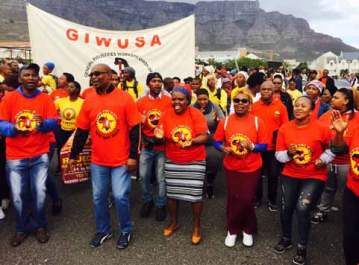 We need a serious discussion on how to reform the unions – still the largest, formal, class-based organisations – and what role they can play in a radical redistribution of wealth and power to the popular classes. These are profoundly political questions. This article argues against reliance upon the state and parties, and for re-building unions (and other workers’ movements) to maximise direct action, autonomy, and education, laying the basis for direct workers’ control over production and the economy. This requires a serious, organised, non-sectarian project of democratic reform and political discussion that spans the unions, including a rank-and-file movement, disconnecting from the state in favour of working class counter-power and patient work to construct a counter-hegemonic apparatus.

Rebuilding the workers’ movement for counter-power, justice and self-management: A contribution to the debate

THE ROBUST EXCHANGE BETWEEN comrades Ronald Wesso and Mametlwe Sebei, in the pages of recent issues of Amandla!, over the South African Federation of Trade Unions (Saftu) brings contrasting analyses of unions to the fore. Wesso favours a “new workers movement” based on the millions of precarious workers. He argues that unions represent a small elite enmeshed in a “neoliberal labour relations system,” and are undergoing “terminal decline” and “collapse.”

I offer my points in a constructive spirit; let us keep our energy for the real enemy. I suggest that Comrade Sebei’s position is more convincing, but that both of them skip some key issues. Specifically, I argue that we need a serious discussion on how to reform the unions – still the largest, formal, class-based organissations – and what role they can play in a radical redistribution of wealth and power to the popular classes. These are profoundly political questions. I argue against reliance upon the state, and for re-building unions – and other workers’ movements – to maximise direct action, autonomy, and education, so laying the basis for direct workers’ control over production and the economy, rather than nationalisation.

It comes down, fundamentally,to the issue of consciousness. I argue against a tendency, common across the left, to continually substitute a search for new vanguard layers, moments and movements, for serious, patient work to construct a counter-hegemonic apparatus oriented to the big battalions of the working class.

THE COLONIAL WAGE
There are many areas on which comrades Wesso and Sebei agree: the ongoing centrality of cheap black labour power to South African capitalism, and the racist oppression this involves; the central role market-based, neoliberal measures like outsourcing play; the reality of a huge, growing pool of insecure, low-wage workers outside unions and collective bargaining; and the necessity of working class rebellion. I concur. But the question is how to link immediate struggles to a profound transformation.

UNIONS RESILIENT
Overall, i do not find the notion that unions are in a state of collapse or demise convincing. In terms of numbers, South African unions are astonishingly stable and resilient. This is all the more remarkable given rising mass unemployment, the worst of any semi-industrial country, and a neoliberal assault from the late 1970s.

Some, like Giwusa, were rooted in earlier Cosatu splits. Like the Federation of Unions of South Africa (Fedusa), which claimed 700,000 in 2017), Saftu (claiming 800,000) has grown mainly by attracting existing unions. Then there is the National Council of Trade Unions (Nactu), and the Confederation of South African Workers’ Unions (Consawu), claiming 290,000, including Solidarity (140,000).

UNION WORK
These are huge figures, if not what any of us might wish. Comrade Wesso is right that union density (the percentage in unions) has fallen because the workforce has grown. But it is still high, not least for the neoliberal era and African context.

Politically, the ongoing reality of three million-plus union members has to be addressed. This means, for me, an ongoing orientation towards unions, the largest formal organisations in civil society outside churches. The facts of serious corruption, the breakdown of workers’ control, serious gender issues, as well as racial, ethnic and national conflicts, intolerance, gulfs between resolutions and reality etc. are undeniable. Precarious workers may be alienated by unions, but, not surprisingly, so are a significant number of other workers, including some union members.

UNION CHALLENGES
But this does not indicate unions are hopelessly compromised or elitist. Rather, it indicates the need for a serious, nonsectarian reform project. That many unionised workers today are relatively well-paid, increasingly skilled, secure etc. is a victory, even if it should not be exaggerated: Bischoff and Tame’s survey data shows that 50% of Cosatu members earn R11,800 monthly or less, with 40% earning R9,000 or below. The victory is threatened by cheap labour, deeply resented by private and state employers, and does not translate neatly into conservatism or defense of neoliberalism.

Even the most compromised unions and bureaucracies must address working class interests, or face internal revolt, splits, or collapse – NUM was forced into major reforms to survive Amcu.

Comrade Sebei is spot-on when hecharacterises unions as progressive but warped movements, contested politically and between base and bureaucracy, the latter enmeshed in corruption and prone to betrayal. Capitalism cannot concede in any sustained way all workers’ demands, so it’s not possible to completely co-opt workers, whether or not they are union members.

UNION STRUGGLES
Unions should have done more to fight the casualisation that threatens their survival, but Sebei is correct in noting that Cosatu and Saftu were not absent, organising general strikes and winning legal reforms.

I agree with Comrade Wesso that unions’ resistance is profoundly compromised by entanglement with the state – especially Cosatu’s ANC/SACPlink. However, this does not delete the resistance.

Certainly, unions’ heavy reliance on labour law amendments and court cases, and on political parties (by Cosatu), should be criticised. But using the state’s laws and courts is also central to CWAO. If the laws can undermine some cheap labour mechanisms, then we have more than a neoliberal labour relations system. Rather, it is imprinted with powerful working class struggles – grave compromises but real concessions, forcing major neoliberal labour market restructuring to rely on legal loopholes, and excluding precarious workers. They are intended to contain unions, but can be used carefully, so long as they do not compromise workers’ control and autonomy.

MANY FRONTS
Perhaps eight million workers are outside the unions. So new formations like the Simunye Workers’ Forum and NGOs like CWAO can be complementary. There is enough space for a thousand initiatives.

Given union neglect (decades of grand resolutions aside) it is hardly surprising many precarious workers are alienated; the new forms of organising should be welcomed. Whether such formations herald a new workers movement that can displace unions remains to be seen, but it is unlikely. The new and the old are effectively operating amongst different
sections of workers.

UNION REFORMS
How then to reform the unions – and for what purpose? These are profoundly political questions.

Comrade Wesso correctly highlights continuities between Cosatu and Saftu, and poor choices unions have made.

Both come down to workers’ ideas. Being willing to fight is a start, but not enough: Amcu, for example, outflanked NUM with higher wage demands and more militancy, but has not shown more internal democracy, nor a serious programme beyond bread-and-butter issues.

I suggest that what is needed is a serious, organised, non-sectarian project of democratic reform and political discussion that spans the unions. This would include a rank-and-file movement, and would allow multiple views and foster critical thought. This needs to engage seriously with the treasure-chest of union and left history and theory, including debates over the state, corporatism, and alliances, insights from the 1980s Registration Debate and “workerism”, and current debates, like disconnecting from the state as raised by, for example, Occupy and the Rojava Revolution. It means replacing reliance on the state and parties with struggle, and destructive inter-union rivalry with a serious project of working class counter-power.

There is no short-cut, no new movement or moment. No new social movements, strike committees, “Numsa moment”, Cosatu renewal, EFF etc. can replace systematic, patient work and building from the bottom-up, including in big unions. It is is a struggle for workers’ control and popular power, not mediated by laws, state ownership, or patronage, and independent of all ruling class factions, state-based or private sector.

**Lucien van der Walt has long been involved in union and working class education and movements and published widely on labour, the left and political economy. He’s part of the Neil Agget Labour Studies Unit and the Wits History Workshop.