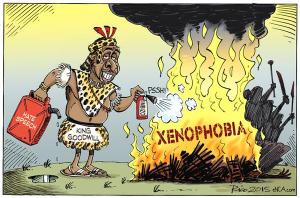 Those in power don’t want to confront the status quo of hatred against immigrants, or South Africa’s imperialist role in the region. They have a narrow set of interests: getting votes, accumulating wealth and power. However, the recent wave of attacks on immigrants and the ruptures of relations with other African countries – especially where South African corporations are operating – have touched the most delicate nerves of the established political powers, who have vowed to advance corporate interests in making profits.

Regardless of who you vote for, these corporations reign above people, along with big politicians and state officials. Whether you are a South African or a “foreign” member of the working class, you remain a threat to these elites. And if you unite, as the masses, against the elites, they get deeply worried. This is not surprising as today South Africa is the most unequal country in the world. When Abahlali baseMjondolo (AbM) activists together with foreign nationals marched against xenophobia in Durban, the police blocked them, telling AbM activists to “stay away from things that do not concern them.” The recent actions by the South African National Defence Force, in occupying areas where the anti-foreigner attacks took place, but targeting foreigners in these raids, is also a tactic to weaken those showing solidarity with victims of xenophobia and those who are critical of ANC government.

Likewise, government officials warning people not to share their views on the attacks and the SANDF response through social media, on the absurd grounds that this inflames attacks, is not simply mediocrity, but deeply disturbing. As when former President Thabo Mbeki said HIV did not cause AIDS, this is another sad day for South Africa.

There needs to be an open process and discussion. The challenge of xenophobia in South Africa is so serious that we need something like a “Truth Commission” where everyone can be given an opportunity to reflect and speak out without fear or favour. Let us be honest about how widespread this hatred is; let us not pretend, like state officials, that the attacks are simply examples of criminal violence. We, as the working class, have to tackle this demon.

I don’t know of any South African who has never come across vicious xenophobic sentiments by fellow South Africans, white and black. These can be heard from parents, relatives, friends, community members, work colleagues, government officials and the public at large. It is not a matter of a few bad apples, but a problem we need to confront as the working class. The politicians will not do this – they blame the problems on criminal elements and secret agendas; not one major politician from the ruling party has even spoken out against the venomous words of the  Zulu king, Goodwill Zwelithini, who helped spark the latest attacks with his utterances. They have instead shamelessly and readily gone all out to defend this man – who, since his infamous “pack their bags” speech, has gone on, with the police minister and their fellow brutes, to walk with self-importance and rub salt on the wounds.

But are we as the working class doing any better? The fact is that the same is happening amongst us ordinary South Africans: we don’t confront those who utter such vicious and venomous words, which is a daily occurrence. There are many unreported xenophobic incidents, not just the big outbreaks, but do we act? Not often. About five or six years ago, my Xhosa neighbour in his early 20s, got stabbed and killed in front of his gate by fellow Xhosa young men merely because he was protecting Shangaans! The local ANC leadership didn’t do anything to condemn this cruel act. I can also tell you it was never reported as xenophobia and such incidents are voluminous.

It is like in apartheid, when whites were taught from an early age that blacks are inferior to them: today, black South Africans are taught that foreigners with dark skins, especially those who are poor and from Africa are inferior humans to them. The attacks, in this situation, target black Africans from elsewhere. I am also aware that Pakistanis and other related foreign nationals are being attacked.

The violence and hate must also be seen as deeply shaped by the current economic and political situation in the country. As long as the current grossly evasive ANC-led government, and party politics in general, are not successfully challenged by something serious – a big working class movement and rebellion for real change – South Africa  is heading towards disaster. Small movements on university campuses like the “#Cecil John Rhodes statue must fall” initiative fail to address these massive tasks.

*Writing in his personal capacity