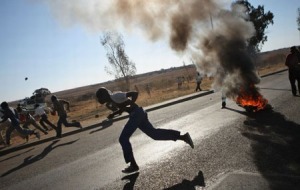 Members of the community of Khutsong chanted struggle songs, and demonstrated outside the Oberholzer Magistrate’s Court on the 14 January 2014. They were in support of fellow community members arrested following an infamous incident of mob justice that occurred in Khutsong in 2013. This mob justice led to the death of five people believed to be gangsters, and of one traditional healer to the gangsters. The gangsters had terrorised the community.

The community members were arrested in 2013, but the court hearing was remanded to 14 January 2014 for the bail applications, which were granted. Jack Magagabe, Willy Jongilanga, Andrew Langa, Happy Leyakane and Metsela Kgosane are being charged on twelve counts, including public violence, destruction of public property, murder and arson. The accused are being represented by a pro-bono (free) advocate.

More than 85 flying squad police cars were deployed in Khutsong in late 2013 on a “peace-keeping” mission. Many cases of police brutality were reported by the community. The township of Khutsong is not happy with how the police have been handling matters so far.