by a Syrian comrade 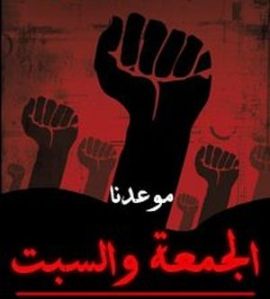 This could to some extent tell my situation when I was inside the “liberated territories” of Syria, that is the territories controlled by the free army, the armed forces of the Syrian opposition. But still it is not the whole truth. It is true that not all the free army militants are devoted jihadists, although most of them are thinking, or telling, that what they are practicing is “Jihad”. The truth is there are a lot of ordinary people, even thieves, etc. among them, as in any armed struggle. My first and lasting impression about the current situation in Syria is that there is no longer a popular revolution going on there – what is taking place there is an armed revolution that could degenerate simply into a civil conflict. The Syrian people, which showed unprecedented courage and determination in the first few months of the revolution to defy Assad’s regime despite all its brutality, is really exhausted now. 19 long months of fierce repression, and lately, of hunger, scarce resources of all types, and continuous bombardment of the regime’s army, weaken its spirit.

Cynically, the beneficiary of all these wasn’t the regime, but the opposition, especially the Islamists. Depending on its international relationships, especially with the rich despotic Gulf governments, the opposition can now feed and support the hungry population in the areas controlled by its forces. Without such support, a grief humanitarian situation could be there. But this support is not provided for free, neither by the Gulf rulers, nor by the opposition leaders. They are, like any other authoritarian force, asking the masses for submission and obedience. This in fact could only mean the real death of the Syrian revolution as a popular courageous act of the Syrian masses.

Yes, I helped some jihadists to live [1], and others to go back to fight; but my real intention was to help the masses I belong to, firstly as a physician, secondly, as an anarchist. To tell the truth, I don’t think that our problem is with Islam itself. Islam can also be egalitarian, or even, anarchistic. In the history of Islam there were scholars who called for a stateless and free Muslim society, even a free universe without any sort of authority.

The problem in what is happening now in Syria is not only the difficult and bloody process of changing a ruthless dictatorship, but might even be worse: substituting it with another dictatorship, which could be worse and bloodier. Early in the revolution, a small number of people, mainly devoted Islamists, claimed to represent the revolting masses, and self-appointed themselves to be the true revolutionaries, the true representative of the revolution. This went unchallenged by the mainstream of the revolutionary masses and intellects. We did oppose such authoritarian and even false claims, but we were, and still are, too few to make any real difference. These people claimed that what was taking place is a religious war, not a mere revolution of repressed masses against their oppressor. They used very aggressively the fact that the oppressor was from another sect of Islam different from the sect of the majority of the people he is exploiting, a sect that was judged frequently by Sunni scholars in the past to be against the teachings of true Islam, and that is even worse than non-Muslims. We were shocked by the fact that the majority of Allawete, the sect of the current dictator, who are poorer and more marginalised than the Sunni majority, did support the regime; and that they participated in his brutal suppression of the revolting masses. This came as “evidence” of the “actual religious war” taking place between Sunni and Allwete. And in this regard these people could really claim to be the real Sunni; they are Muslim scholars and they are so sectarian that no one can challenge them in this regard. In fact, they built their spiritual and moral authority, before the material one. Then came the material support from Gulf rulers.

Now, the potential for any real popular struggle is decreasing rapidly; Syria is now governed by arms; and only those who have them can have a say about its present and future. And that is true not only for Assad’s regime and its Islamic opposition. Everywhere in the middle east, the great hopes are disappearing rapidly. In Tunisia, Egypt, and elsewhere. The Islamists seem to get all the benefits of the courageous struggles of the masses. And they could easily initiate the process of establishing their fanatic rule, without strong opposition from the masses. I could feel exactly as Emma Goldman felt in 1922 when she broke with the Bolsheviks and finally became disillusioned about their rule. In fact, no one in the whole Arab and Muslim world looks closer to the Bolsheviks nowadays than the Islamists, even devoted Stalinists lack the full criteria of their ancestors compared to the Islamists. For a long time they were badly repressed by local dictators, used to frighten the masses and the west; and because of that might have looked as the most decisive part of the opposition to these dictatorships. At the same time, they really have the same efficient propaganda machine as the Bolsheviks once did. They are so authoritarian and aggressive, exactly as the Bolsheviks were during the decisive days of the October revolution. So it looks rational if the Arab peoples opted to try them, or to accept their rise to power. Even to hope, as the Russian workers and peasants once did, that they could really create a better and different type of society. For Emma she awoke very early from such disillusion, for the masses themselves, it took so long to realise the truth. Still as Emma thought, rightly as I claim: the masses were very righteous to rise up and try to change their miserable reality, the big “mistake”, if it could be described as a mistake, was made by the authoritarian forces which sought to hijack the revolution. We still support the revolution, not its false “leaders”.

The other issue that I think is so important for us, Arab anarchists and Arab masses, is how to build the libertarian alternative: that is how to initiate an effective anarchist or libertarian propaganda and how to build libertarian organisations. To tell the truth, I never tried before to convince anyone to become anarchist. I opted only for a free dialogue between “equals” with everyone. I never claimed that I know everything or that any anarchist or any other human being deserves to be the “guide” or the “leader” of others, that anyone deserves to be in the same position of the Pope, Muslim Imams, or the general secretary of any Stalinist or Leninist party. I always thought that trying to affect others is another way to practice  authority upon them. But now I see this issue from another perspective: it is all about making anarchism “available” or known to all those who want to fight any oppressing authority they suffer from; be they workers, unemployed, students, feminists, the youth, or ethnic and religious minorities, etc. It is about trying to build an example or sample of the new free life in the body of a free or libertarian organisation; not only as a living manifestation of its potential presence, but also as a MEANS to achieve that society. We have to make anarchism well-known to all the slaves and victims of all the current oppressive systems and authorities. An EFFECTIVE ANARCHIST PROPAGANDA is, as I think, the first aim of such organisations. In a word, we are witnesses to the bankruptcy of the “secular” authoritarian trends (including the nationalists and Arab-nationalists, and Stalinists and other verities of Leninism), and very soon the bankruptcy of the religious authoritarian ones too. The future alternative should be,  logically, a libertarian one. Of course, anarchism cannot be implanted artificially, it must be a “natural” product of the local masses’ struggles. But still it will need good care and to be properly highlighted. This will be, supposedly, the role of our propaganda. Still there will be no “center” in our organisation, no bureaucracy, but it is still supposed to be as effective as its authoritarian counterparts, or even more efficient.

Our Stalin or Bonaparte is still not in power, the Syrian masses still have the opportunity to get a better outcome than that of the Russian revolution. It is very true that this is difficult and becomes more so every minute, but the revolution itself was a miracle, and on this earth, the oppressed can create their own miracles, from time to time. This time also, we, Syrian anarchists, put all our cards, and all our efforts with the masses. It couldn’t be any other way, or we would not deserve our libertarian name.