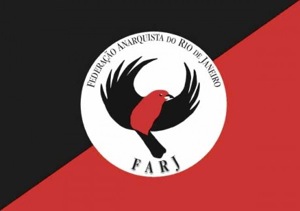 In this interview, realised between August and October 2010, the Anarchist Federation of Rio de Janeiro (Federação Anarquista do Rio de Janeiro – FARJ) talks about its understanding of concepts such as especifismo, organisational dualism, social insertion and the role of the anarchist political organisation in relation to social movements and the class struggle.

It also deals with the recent entry of the FARJ into the Forum of Organised Anarchism (Fórum do Anarquismo Organisado – FAO) and the social effects of Rio de Janeiro being selected as a FIFA 2014 Host City, as well as sometimes difficult questions, such as finding a balance between necessary levels of theoretical and strategic unity, and the need to grow as an organisation.

END_OF_DOCUMENT_TOKEN_TO_BE_REPLACED

Interview with co-author of “Black Flame: The Revolutionary Class Politics
of Anarchism and Syndicalism”

END_OF_DOCUMENT_TOKEN_TO_BE_REPLACED

Dearest readers: We’re absolutely thrilled to bring you this wonderful new interview with Michael Schmidt and Lucien van der Walt, the authors of AK’s stunning new book Black Flame: The Revolutionary Class Politics of Anarchism and Syndicalism. In recent months, we’ve posted excerpts from the book, and a roundup of recent reviews, but with today’s post, we’re able to bring you, for the first time, Michael and Lucien’s own thoughts on the book, its genesis, and its usefulness in our current context. Read and enjoy!

AK PRESS: There has been quite a buzz around Black Flame: The Revolutionary Class Politics of Anarchism and Syndicalism. This is, am I right, volume one of what you call Counter-Power. Can you tell us a bit about what how people have responded to the book?

LUCIEN VAN DER WALT: The response has been overwhelmingly positive. We’re very happy with it. Of course, not everyone agrees with us on everything: that’s only to be expected, and anyway, we make it clear in the opening chapter that we want debate and welcome critique. Some folks, of course, don’t like the book at all—but no book can please everyone! Anyway, we want to stir things up a bit.

END_OF_DOCUMENT_TOKEN_TO_BE_REPLACED

1. The history of worker and anarchist movement in South Africa began more than 100 years ago. Could you tell Russian comrades about the history of your struggles (about organisations from the beginning of the 20th century like International Socialist League etc)?

South Africa would have remained an agrarian backwater colony similar to Kenya if it were not for the discovery of diamonds in 1867 and of gold in 1886. These two events saw a massive influx of capital, infrastructure and of a mostly white industrial working class. The new white working class was overwhelmingly race-protectionist, what was called “White Labourite” and early trade unions were built on those lines. But a small radical tendency with strong anti-racist, anarchist and syndicalist leanings (starting with the Socialist Club of Port Elizabeth in 1900) eventually saw the establishment of a local section of the Industrial Workers of the World (IWW) in 1910. It was operative mostly among tramway workers in the gold-mining town of Johannesburg, the old Boer capital of Pretoria and the British-dominated port of Durban but despite its anti-racism did not manage to break out of the white ghetto. But although the IWW (SA) shut down in 1913, rank-and-file syndicalist ideas spread during the general strikes of 1913-1914, within the anti-war movement during World War I, and by 1917, the Indian Workers industrial Union (IWIU), organized among Indian indentured stevedores, hotel workers and cane-cutters in Durban, was established along IWW lines. The IWIU was backed up by the formation later in 1917 of the Industrial Workers of Africa (IWA), also based on the IWW’s revolutionary syndicalist, anti-racist class-struggle concept. The IWA is believed to have been the first black trade union in British-colonised Africa and by 1919 was flanked by similar syndicalist unions, the mostly “coloured” (mixed-race) Horse-Drivers Union in the diamond-mining town of Kimberley, and various unions in the port city of Cape Town. These revolutionary syndicalist unions were established by a group of white, black, coloured and Indian syndicalist militants from the Industrial Socialist League, a 1915 revolutionary splinter from the reformist socialist International Socialist League, and the IWA, IWIU and associated unions were so influential that for a period, they shifted the Transvaal section of the South African Native National Congress (SANNC, later renamed the African National Congress, ANC) in a syndicalist direction. By 1921, these unions formed the core of the new syndicalist-oriented Industrial and Commercial Union (ICU). Although the ICU’s constitution was also IWW-based, it was amore ideologically mixed union, and its radicalism was compromised by elements of black nationalism, Garveyism and communism. The first communist party in Africa, the Communist Party of South Africa (CPSA) was established by syndicalist militants in 1920, but like the first communist parties in countries such as Brazil and France was very libertarian and syndicalist. A rival Bolshevik CPSA – Communist International (CPSA-CI, the fore-runner of today’s South African Communist Party, SACP) was established the following year, adhering to Lenin’s 21 points and attracting many original CPSA militants. The revolutionary remainder of the CPSA renamed themselves the Communist League. The ICU peaked in 1927 with about 120,000 members. Importantly, it spread beyond South Africa to establish branches in South-West Africa (Namibia), and Southern Rhodesia (Zimbabwe). The Southern Rhodesian branch survived well into the 1950s, but the South African parent organization disintegrated in the late 1920s, bringing an end to South African anarchist-influenced syndicalism. Neighbouring Mozambique (like Angola, the Azores, and Portuguese Guinea) was a place of exile to which many Portuguese anarchists were deported in the 1890s and early 1900s. Some of them established an exile anarchist organization, the Revolutionary League, in the port capital of Lorenco Marques (Maputo) in the early 1900s. By the early 1920s, a significant syndicalist element had arisen among Mozambican workers under the influence of the powerful anarcho-syndicalist General Confederation of Labour (CGT) in Portugal (the Portuguese movement was proportionately larger than the Spanish movement). But the Mozambican movement apparently had no contact with the South African movement because of the language barrier, appeared not to have broken out of the white worker ghetto, and was suppressed from 1927 by the Salazar dictatorship. So ended the “glorious period” of anarchist and syndicalist organizing in South Africa. Most dissidents expelled from the Bolshevik CPSA in 1928 for their syndicalist sympathies became Trotskyists instead of returning to the anarchist and syndcalist fold. But rank-and-file syndicalism (usually called “workerism” by the communists) reappeared from time to time as a minority strain. In the 1950s, for example, a South African section of the tiny libertarian Marxist international called the Movement for a Democracy of Content (MDC) was established and played a key role in the Alexandra bus boycott. Some dissidents from the SACP who left over the 1956 Soviet invasion of Hungary moved in an anarchist direction (one of them, Alan Lipman, is close to the ZACF). The rise to power of the National Party in 1948 took what was an already polarized racial situation and divided people further. A whole raft of repressive legislation was introduced that outlawed the Communist Party, geographically carved up the country into ethnic enclaves (the infamous Group Areas Act), racially segregated public amenities such as parks, beaches, buses and toilets, and made mixed marriages and inter-racial relationships a crime. This was an extension of segregationist laws which had been in operation since colonial times. Between 1910 and 1960, in real terms, black wages stayed static and the black working class was mostly resigned to its fate under racial capital – except for the 1949 miner’s strike, the 1950s passive resistance campaigns aimed at the pass laws (which restricted the movement of black men, and later, black women) and other apartheid legislation which culminated in the signing of the 1955 Freedom Charter, and the 1961 turn of the ANC (desperate after its attempts at legal, peaceful reform failed) towards a limited, ineffective armed struggle (an ANC propaganda tool rather than proper armed resistance) led to the arrest of Nelson Mandela and other middle-class ANC/SACP leaders.

END_OF_DOCUMENT_TOKEN_TO_BE_REPLACED

A member of the ZACF poses the same set of questions to two activists from Zimbabwe.

The first interviewee, Biko Mutsaurwa, is an anarcho-communist from the Uhuru Network and facilitator for the Toyi Toyi Artz Kollektive in Harare.

The second interviewee is Comrade Fatso, AKA Samm Farai Monro, a cultural activist and artistic facilitator for Magamba! The Cultural Activist Network.

The interviews were conducted in Johannesburg on 21st of June, 2008 – the day before MDC leader Morgan Tsvangirai announced his decision to not participate in the June 27 presidential election run-off.

END_OF_DOCUMENT_TOKEN_TO_BE_REPLACED

An interview with Michael Schmidt of the ZACF by Alternative Libertaire

The ZACF is one of the most active libertarian formations in the southern part of the African continent. In order to better understand its history, its intervention in southern African society and the fights which it impels and supports, we interviewed one of its militants, Michael Schmidt.

Alternative Libertaire: Could you tell briefly in which conditions/context and how Zabalaza, and then the ZACF, were built?

Michael Schmidt: The roots of what became the ZACF are to be found in the anti-apartheid struggle of the late 1980s and early 1990s, with the formation of two semi-clandestine anarchist federations, one in Johannesburg and another in Durban, within the anarcho-punk movement. So the initial conditions were one of low-intensity civil war between the white and black nationalist organisations, and the organised anarchists took a strong stand against neo-fascism, nationalism and military conscription. From this came the Workers’ Solidarity Federation in 1995 (a year after the first democratic elections). The WSF was the first national anarchist organisation and developed a more comprehensive platform of positions on race, class, gender, imperialism etc, most of which remain the ideological foundation of the movement today. The WSF had a significant number of trade union & shop-steward members and was 50/50 black and white. It was dissolved for tactical reasons in 1999 as the ANC began to move rightwards and trade unions became difficult to operate in. In the interim before the ZACF was founded in 2003, we ran the independent Workers’ Library & Museum (working-class meeting-place) in Johannesburg and the Zabalaza Books propaganda unit. The rise of the radical new social movements from about 2000 saw us help found the Anti-Privatisation Forum, and later form the ZACF to participate directly in social movement activism. So in practice, we have moved from semi-clandestinity to syndicalism to social activism, depending on objective conditions within the working class.

END_OF_DOCUMENT_TOKEN_TO_BE_REPLACED

1. First, perhaps you could say something about yourself and the organisation you are part of?

This interview was done with Sh. And St. of the Durban-based Zabalaza Action Group (ZAG), Joe Black of the regional Anarchist Black Cross (ABC), who is the ZACF acting regional secretary, and Michael Schmidt of the Johannesburg-based Bikisha Media Collective (BMC) who is the ZACF acting international secretary. Joe and Sh. Are also involved with Zabalaza Books (ZB), while Michael is also involved with the ABC. The collectives we are members of are among the founding collectives of the ZACF. Some of them, like ZB, originated as underground collectives a decade ago in the twilight of apartheid.