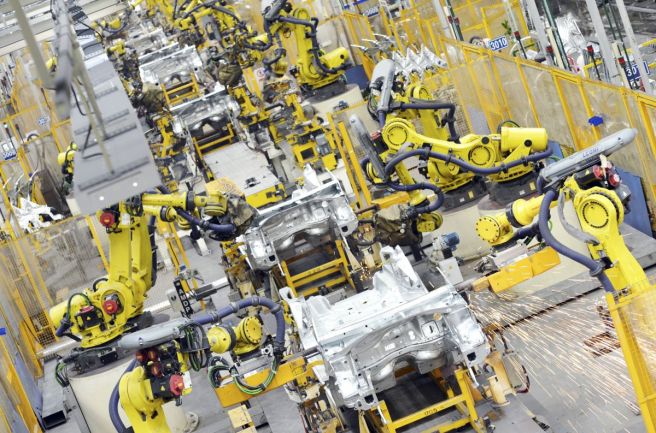 Mechanisation and automation have been called the Fourth Industrial Revolution. But these are not inevitable or neutral economic realities. They are political weapons of oppression under capitalism. It is a war against the working classes to increase profits. It is no an accident that bosses choose to mechanise and automate in the context of the massive crisis of capitalism.

The political nature of the Fourth Industrial Revolution

Mechanisation and automation have been called the Fourth Industrial Revolution. But these are not inevitable or neutral economic realities. They are political weapons of oppression under capitalism. It is a war against the working classes to increase profits. It is no an accident that bosses choose to mechanise and automate in the context of the massive crisis of capitalism.

Recently, the accounting multinational company, Grant Thompson, conducted a study amongst 2500 multinational corporations regarding mechanisation, automation and the introduction of artificial intelligence. Of these companies, 56% said they planned to automate parts of their operations within the next year. Another study by Oxford University was even starker. It stated that 47% of jobs in the United States and possibly 50% of jobs in parts of Africa – including South Africa – could possibly be lost to artificial intelligence, mechanisation and automation in the next two decades. It is clear that if this transpires, the consequences will be dire for workers in Africa – including South Africa – and their ability to organise.

Some people have said that this move to use advanced computers and automation is the ‘Fourth Industrial Revolution’; and that the evitable advance of technology must be accepted. The reality, though, is that automation is not inevitable, but a political choice of the ruling class to wage a war against the working class to increase profits and oppression. It is important to understand how and why growing automation is political, and to do so we need to look at the relations at the heart of capitalism.

Capitalism is a system in which the ruling class, through private property and state ownership, own and control the means of production – in other words the farms, banks, factories, machines, mines and services. They use their control of the means of production and capital to hire workers to produce goods to sell at a profit. In doing so, capitalists also compete with one another in the market. The vast majority of people, the working class, are kept in a position whereby they own very little and are forced to work for the ruling class to survive. The state assists the ruling class to maintain this situation through the law and – when need be – policing.

Workers, however, never get the full value of their labour; bosses only pay workers a small share of the value they produce through wages, and keep the rest that workers produce as profit. It is this exploitation that defines relations between bosses and workers. To keep workers exploited bosses have to try and make them as powerless as possible through oppression. Workers throughout history have collectively resisted and fought to try and win a larger share of the value that they produce in terms of better wages. To try and break this resistance, one weapon capitalists have is to introduce technology like machines and computers.

Linked to this, mechanisation and automation is about disorganising and increasing the oppression of workers. So bosses don’t always introduce all the new technologies that exist or that are possible. They only introduce technology that will drive down wages; or increase oppression and the disorganisation of the working class or both. In many of the companies that choose to mechanise or even automate, there is usually a history of workers organising. Thus, companies mechanise and automate often to try and break organising.

Lessons from the past

We can see how this has worked by looking back at the past. The first machines to be introduced by capitalists into factories took place in 1811 in Britain during what is called the First Industrial Revolution. The machines were introduced so that they could be operated by low paid, unskilled and so easily replaceable workers. Before then skilled craft workers were responsible for spinning and weaving. They were well organised into guilds, and because of their skills they were also well paid – meaning through their wages they were taking a relatively high percentage of the value they produced. To break these workers and their organising, and to drive up profits by lowering wages, bosses began introducing machines that allowed unskilled low paid workers using them to do the weaving and spinning.

The weavers and spinners began resisting being replaced by machines and unskilled workers by entering into factories and breaking the machines. The state then sent the army against them, and implemented the death sentence for workers caught destroying machines. So the state and bosses worked together to smash organised workers, to lower wages and increase profits through introducing machines and unskilled labour. Through this, divisions were also created amongst workers as bosses pitted skilled and unskilled workers against one another – undermining the prospect of united resistance.

Mechanisation and the capitalist crisis

Today we are again seeing a massive increase in mechanisation and automation, the so-called Fourth Industrial Revolution. The aim is again to undermine and prevent workers organising and to drive down wages. It is not an accident that bosses are choosing to mechanise and automate today in the context of a massive capitalist crisis. It is also not an accident they are targeting countries and sectors where there has been a recent history of worker organising.

The new drive to mechanise and automate is a response by corporations to try and increase profits in the capitalist crisis. It is also not a coincidence that multinational companies operating in China are at the forefront of automating and mechanising. This is because in recent years Chinese workers have been organising on a massive scale, and through mechanisation and automation there is an attempt by bosses to break this.

The attempts by bosses, however, to automate and mechanise won’t end the current capitalist crisis. This is because the current crisis is partly due to over-production, something which mechanisation and automation does not address and will possibly make worse. In the past, the job losses due to mechanisation were offset by economic growth which created new jobs. Today capitalism is no longer growing, and mechanisation in this context will lead to greater unemployment. This means there will also be fewer workers to buy goods companies are producing, meaning over-production will remain a problem, which will lead to less profits in the long run for companies involved in manufacturing.

It is clear, therefore, that the mechanisation and automation were are seeing in the so-called Fourth Industrial Revolution is an attack on the organising of workers. It is also clear that workers need to resist mechanisation and automation, as today in the context of a capitalist crisis it offers the working class very little. But to do so, workers are going to have to experiment with new ways of organising, ways that can build unity in a working class that is now defined by mass unemployment, casualization and huge divisions.

Some unions in this context have called for a just transition that will lessen the impact of the so-called Fourth Industrial Revolution on workers. The reality though is, capitalists, states and politicians are not interested in any just transition. This means, as part of fighting the new wave of automation and mechanisation, we have to renew the struggle for revolution to overthrow capitalism and the state. If we don’t, the automation and mechanisation we are seeing today, and will see in the future, will have devastating consequences for the working class, including mass unemployment for large sections of the class (something we already see in South Africa).

Indeed, the problem we see is that mechanisation and automation are not neutral but rather reflect and are used as political weapons of oppression under capitalism. In a different society, mechanisation and automation could have benefits, but under capitalism that is experiencing a massive crisis, for the vast majority of people, it is a living nightmare.