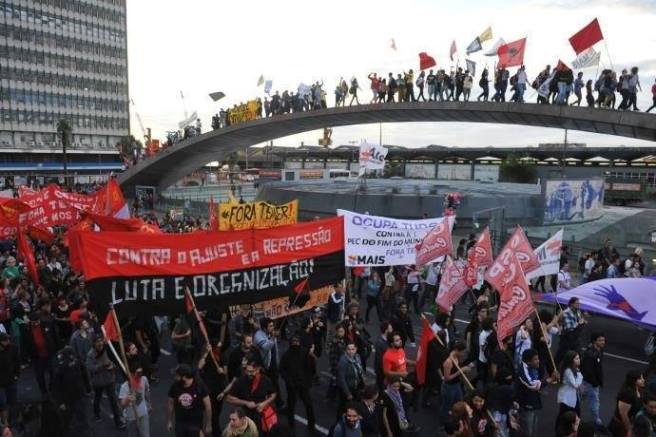 We learnt that on October 25th, a large police operation called « Erebus » (Érebo in Portuguese, i.e. the name of the Greek god of darkness) was launched against the anti-authoritarian movement.

The civil police invaded at least 4 libertarian premises and claims to have warrants against a dozen of premises and about 30 people. They raided the occupation Pandorga and the Parrhesia premises as well as the political and cultural space Ateneu Libertário Batalha da Várzea that used to be FAG’s official premises. The Federação Anarquista Gaúcha (FAG) is specifically targeted by this operation as it is considered by the stupid-as-usual police to be the top organization of the anarchist movement in Porto Alegre. They are accused of forming a gang in order to commit crimes against public and private possessions.

It has to be known that such an operation isn’t the first one. Actually, it is the 4th time in less than 10 years that FAG is targeted by the police and the State in Rio Grande do Sul (RS, Brazil). In October 2009, while FAG is campaining about the police crime of Elton Brum, several plain-clothes cops raided the building without warrant and declared they found… anarchist literature! In 2013, the police invaded twice, in June and in October, the Ateneu Libertário Batalha da Várzea to seize or break computers, furnitures and documents. At that period, other premises of the social and political left and individual houses were also raided as part of the Bloco de Luta.

Nowadays, this operation happens as the State of Rio Grande do Sul and the municipality of Porto Alegre are facing heavy and determined struggles from both education and municipality workers. In the meanwhile, Temer’s government is stuck deep into cases of corruption. The FAG takes part in the current struggles in Porto Alegre as a group of activists and as workers with their libertarian ideas and practices.

The police operation Érebo aims to criminalize social movements and in particular the FAG and the social anarchist ideology it defends. It aims to disable the struggles and the unions who use direct action to defend their living conditions against austerity measures and the capitalist system, against colonialism, racism and patriarchy.

But one can’t erase ideas that have been the living heart of the workers’ movement for decades, one can’t erase the revolt for freedom, class independance, direct democracy and popular power!

The Anarkismo network and its following organizations :