The mass “Makhnovist” (anarchist) movement emerged in 1917 in Ukraine, a colonial country in East Europe that was until then divided between the Russian and Austrian (or Austro-Hungarian) Empires. The Makhnovists made an anarchist revolution. The anarchists were a central force in the 1917-1921 Ukrainian War of Independence.

They fought for decolonisation through anarchist revolution, meaning the independent Ukraine should be reconstructed on anarchist lines: self-management and participatory democracy, equality not hierarchy and domination, collectively-owned property, and the abolition of the class system, capitalism and the state. They were called “Makhnovists,” after the leading Ukrainian anarchist militant, Nestor Makhno. He came from a poor peasant family, had been a factory worker, and former political prisoner.

The Story of the Makhnovists and the Anarchist Revolution in the
Ukraine, 1918-1921

Notes from a TAAC workshop

The mass “Makhnovist” (anarchist) movement emerged in 1917 in Ukraine, a colonial country in East Europe that was until then divided between the Russian and Austrian (or Austro-Hungarian) Empires. the Makhnovists made an anarchist revolution. The anarchists were a central force in the 1917-1921 Ukrainian War of Independence.

In 1917, the Russian empire underwent revolution. Many forces struggled. Some wanted to restore the Russian imperial government (and the Russian royal family), overthrown in March. Others wanted to create a new, better society.

Ukraine was a split between the Russian and Austrian empires. It was the richest colony of the Russian Empire, exporting wheat and producing agricultural equipment. Now, in 1917, everything was set to change.

What was the Russian Revolution?

Before the Revolution, most land was held by a small landowning class; government and private industries exploited workers; the empire had many oppressed nationalities who wanted independence. (Russia itself was only half the Russian empire).

The Revolution overthrew the Emperor (Tsar); the army split; peasants started to take over land; oppressed nationalities demanded independence; and workers began taking over cities and industries. Many forces in Ukraine fought for independence, but they did not agree on the content and form of that independence.

Who was Nestor Makhno?

In Ukraine, anarchists were the main revolutionary force. They fought for decolonisation through anarchist revolution, meaning the independent Ukraine should be reconstructed on anarchist lines: self-management and participatory democracy, equality not hierarchy and domination, collectively-owned property, and the abolition of the class system, capitalism and the state.

They were called “Makhnovists,” aft er the leading Ukrainian anarchist militant, Nestor Makhno. He came from a poor peasant family, had been a factory worker, and former political prisoner.

Who were the enemies of the Makhnovists and why?

The Makhnovists wanted to push the Russian Revolution to anarchism. With this agenda, Makhnovist anarchists faced many enemies.

Why were they enemies?

Actually, the monarchists, Marxists, nationalists and imperialists stood for something similar:

1) a tiny elite would control the land, factories and state, and rule the peasants and workers; and, along with this

2) no independence for the Russian colonies.

For example, the Marxists built a revolutionary one-party dictatorship, nationalized industry and land, and repressed all their enemies. In reality, this meant a tiny unelected Marxist elite crushing trade unions, social movements, and anarchists – and controlling all wealth. From 1918, the Marxist state reconquering the numerous breakaway Russian colonies.

This meant the Marxists were against the Makhnovists, who were a threat to their dictatorship, by their example, ideas, and independence.

What did the Makhnovists want instead?

The anarchist Makhnovist movement wanted to destroy class rule, which means the rule of a wealthy and powerful elite, over the peasants/ family farmers and working class majority.

Every ruling elite, regardless of being German/ Austrian, Russian, or even Ukrainian, always dominated and exploited the popular classes. Fighting class rule was part of the genera anarchist struggle to end all oppression and hierarchy (including colonialism and racism).

The anarchists wanted society to be run democratically by ordinary people, no matter their race or culture, using the wealth for human needs – not elite profits and power. Where no person oppressed or exploited another. Where all nationalities were freed from imperialism.

This meant they politically opposed the Marxists as well as the nationalists and monarchists.

In the turmoil of the War of Independence, from 1917-1921, they pushed for their radical agenda in the face of intense Marxist and nationalist and monarchist opposition.

The Anarchist Revolution in the Ukraine

In much of the Ukraine, especially the south, the anarchist Makhnovists created a free, independent worker-peasant-soldier council (in Russian: “soviet”) system. The first elements of this were developed in 1917, when Makhno and his militants began to organize unions, factory and farm workers committees, and assemblies – moving to land reforms and strikes.

This was disrupted by a German imperialist occupation of the territory, permitted by the shameful First Treaty of Brest-Litovsk, signed by the Russian Marxists Lenin and Trotsky in February 1918.

But in 1918, the anarchist Makhnovist movement exploded into life again as armed partisan groups and mass-based popular struggles and structures pushed forward. Now, the revolution took hold on a larger scale than ever.

Ordinary people ran things through neighborhood, workplace and soldiers councils. Council delegates were always accountable to regular mass meetings of neighbors and workers. They took orders from the people; they did not give orders and they were not a ruling elite. They were comrades and indeed servants, not masters. And workplaces and communities were under the direct control (the selfmanagement) of the ordinary people. Collectives were formed, land was redistributed and life was changed.

Councils were federated, and linked through congresses. Congresses expressed the demands of the working class and peasantry on a large scale, and developed democratic plans. Land, factories and other wealth were commonly owned wherever possible, run through the councils and used for quality services, good jobs, equality, and solidarity.

The anarchist Revolutionary Insurrectionary Army of the Ukraine, controlled by the councils including the soldiers councils, acted to protect the independent revolutionary Ukraine.

Even its commanders were elected: Makhno himself was elected, and could be forced  to step down. And he did step down. It was a democratic “militia”: a people’s army, recruited form the people, not an army used by a ruling class against the people.

Th is was the anarchist society – the Makhnovists’ words made flesh. An anarchist revolution took place in a large territory. It showed a concrete alternative to monarchists, Marxists and nationalists.

The following chart shows how the anarchist zone (Ukraine) was different to the Marxist zone (Russia):

Through the council system, the working class and peasantry of Ukraine also achieved independence for this colony. The federation of free Ukrainian councils meant there was a new, independent and anarchist Ukrainian system.

The puppet state of the Germans, called the Hetmanate, was ejected from much of the territory. The efforts by the Russian Marxists to reconquer the territory and create a puppet Ukrainian “Soviet Republic” was resisted. The attempt by the rightwing monarchists to reinstall the Russian emperor in the territory was resisted. Th e attempt by the Ukrainian nationalists to create their own state, like the Central Rada and the “Directory”, were resisted. Power and wealth was placed fi rmly in the hands of the working and poor masses, not a small elite – local or foreign.

The new anarchist Ukraine was free of Russian, German and Austrian imperialism. It also rejected the shameful treaty of the Russian Marxists, which assumed a central Russian state had the right to dispose of Ukraine.

And it also fought to be free from capture by the emergent Ukrainian elite of state managers, landlords and capitalists.

The men and women of the anarchist Makhnovist forces – these included the army as well as the councils and the workplaces – included peasants, ethnic Ukrainian as well as others like Greeks and Cossacks, some urban workers, Russian- and Ukrainian-speaking; the persecuted Jewish minority was also included. Independent anarchist Ukraine was inclusive of all working and poor people; its enemies were the rich and powerful of every race and nation.

So, the anarchists had established the independence of Ukraine – but through a revolutionary anarchist society. They rejected the occupations by Germany, and Austria, and they rejected the right of any elite to recapture Ukraine, even if it was a Ukrainian elite.

What Happened to the Makhnovists and the Revolution?

The Makhnovists were defeated by the continual armed attacks by monarchists, nationalists and Marxists. Eventually the Marxists won. They made Ukraine into a colony, called “Ukrainian Soviet Socialist Republic,” part of a recreated Russian empire, the “Union of Soviet Socialist Republics” (USSR/ Soviet Union). Th ere was nothing “socialist” about the system; it was state-capitalist colonialism.

Why were they defeated?

One obvious reason for the Makhnovist defeat was that they were outgunned: too many enemies, on too many fronts, for too long.

The attacks undermined the councils and workplace and military self-management. When the Makhnovists were pushed out of territory, the invading forces terrorized the local people and killed anarchists. When Makhnovists took the areas back, they had to start from scratch. The military effort was exhausting, consuming resources, men, women and materials.

But why were they outgunned all the time? Why are the enemies so powerful in the fi rst place?

The Makhnovists had no choice but to make alliances with different forces at different times: sometimes with the Marxists and nationalists against the monarchists, sometimes with independent armed groups.

It is worth thinking about whether other allies should have been considered more oft en. For example, the anarchist Makhnovists could have worked with the nationalists, who also wanted independence, while at the same time winning over the rank-and-file of the nationalist forces ot anarchism. And they might have been able to negotiate a better deal than with the Marxists.

Another problem is that the anarchists in Russia itself were very disorganized and confused – although there were exceptions, like G.P. Maximoff ’s anarcho-syndicaists. If the Russian anarchists were better organized, they could have weakened the Lenin-Trotsky Marxist dictatorship – and potentially created a second anarchist zone in Russia itself. This would have tied up the Marxist forces, and provided a powerful ally and example.

Chronic disorganisation is one reason why the much smaller but much better organized Ukrainian anarchist movement made a revolution – and why the bigger Russian movement failed to do so. In exile, many of these disorganised anarchists refused to learn the basic lessons: these are that anarchism must go to the masses, be unified in word and deed, and operate on collective responsibility. Makhno, his comrade Piotr Arshinov and others, in exile, drew these hard-won lessons in the important Organisational Platform of the Libertarian Communists.

Badly organized, anarchism / syndicalism is crippled and weak – well organized, it can help change the world. This is what the Makhnovists show us. Let us remember their heroic example. 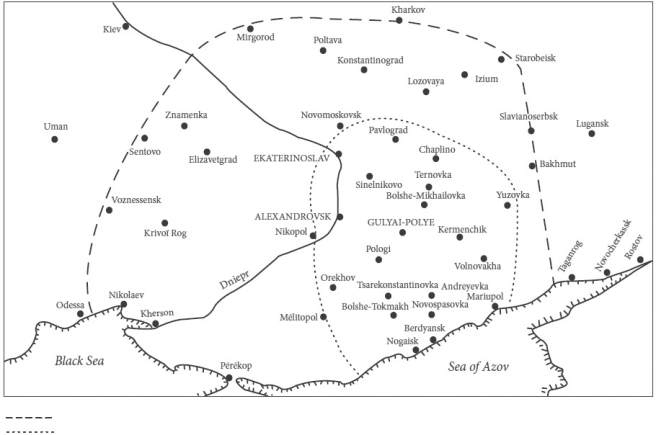