In examining the possibilities for politics within and at a distance from the state, it is important to revisit the democratic traditions of the working class, which are often learned through struggles and strikes – and which were exemplified by the new unions of the 1970s and 1980s. Not much of this alternative tradition of democracy outside the state has been captured in official histories, which present the attainment of democracy in terms of the formation of a parliamentary government in 1994.

There is a larger problem here of how the working-class heritage – the intellectual and organisational and political traditions of labour and the left – has been side-lined in media, textbooks, monuments and narratives; this also involves a narrowing of our political imagination, with our view of “democracy” itself narrowed dramatically. There has been a focus on elections and political parties and electoral politics. This reflects and reinforces a view that assumes a separation of the political – basically left to the state and the parties – and the economic – issues like wage negotiations are left to unions, and union involvement in politics is increasingly reduced to lobbying political parties.

END_OF_DOCUMENT_TOKEN_TO_BE_REPLACED

The talk that I’m going to present today is based on a research project that I carried out with my colleague Vladislav Kruchinsky in South Africa in 2011-2013. The aim of our research was to analyse and explore the methods and practices of self-organisation from below that existed in the crucial 1980s period of the anti-apartheid struggle.

The vast majority of the material that’s written about that period of struggle is devoted to the role of the large, institutionalised anti-apartheid forces, such as the United Democratic Front, an umbrella body for the community-based anti-apartheid organisations including church and sports groups, which was formed in 1983. A large part of it also focuses on the African National Congress, which is presented in the dominant narrative of the ANC as the leader of the anti-apartheid struggle.

My aim, with Vlad, was to look beyond these big organisations, and to focus on communities’ struggles, viewed through ordinary people’s stories. When we started our research, we understood that we wanted first-hand information, from the participants in the struggles. This is social history, meaning that it looks at the view from below, with the people interviewed themselves active participants in the stories they tell. We conducted extensive interviews with active members of the communities, township residents, from those days. We hope to finish this project with a book, which will be a compilation of the interviews.

END_OF_DOCUMENT_TOKEN_TO_BE_REPLACED 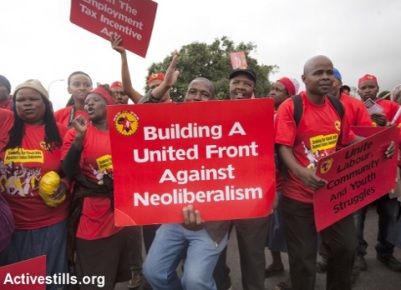 When we talk about people’s power we are not thinking about putting our leaders into the very same structures. We do not want Nelson Mandela to be the state President in the same kind of parliament as Botha. We do not want Walter Sisulu to be Chairperson of a Capitalist Anglo-American corporation.

So said a United Democratic Front pamphlet called “Building People’s Power” that was produced in the 1980s. It continued, “We are struggling for a different system where power is no longer in the hands of the rich and powerful. We are struggling for a government that we will all vote for.” The UDF, formed in 1983, was a coalition of anti-apartheid community, church, worker, youth, sports and other groups. Along with forces like the “workerist” Federation of South African Trade Unions it played a key role in resistance.

What the UDF wanted sounds like almost the exact opposite of what actually happened: more than 20 years later, it is not Sisulu who is chairperson of Anglo-American Corporation, but the ANC’s Cyril Ramaphosa, the Butcher of Marikana, who is a shareholder on the capitalist Lonmin Corporation. Even though people have the right to vote now, fewer and fewer people are actually voting because they don’t get what they vote for; and power and wealth are still in the hands of the rich and powerful.

What went wrong, and what lessons we can draw? What are some of the similarities between the 1980s and today? What is the way forward?