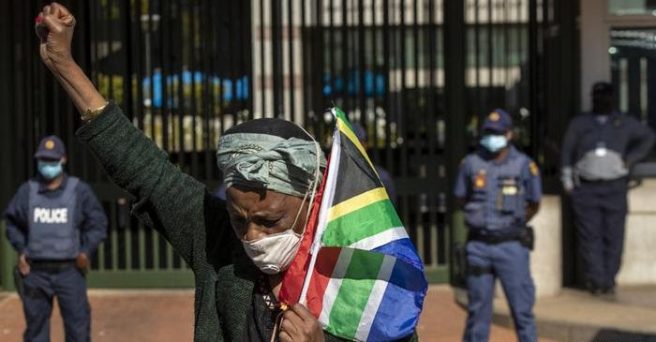 In the midst of the COVID-19 pandemic, it often seems as if we are stuck in a dystopian movie. In this movie death is stalking us, hospitals overflow with the sick and dying, and the grave diggers are at work. We know more victims will soon die as the folly of millions of workers being forced by circumstances to return into cramped mines, banks, factories and warehouses is so evident. Those that are no longer needed by the billionaires who own the companies are marshalled daily by the police and military dishing out violence and on occasion, humiliation, to underline their power and the power of their bosses.

The trauma of it all has led many people to seek solace in fiction or conspiracy theories. It can be morbidly comforting to believe in fantasy in times of strife. We, however, fall into such fantasies at our own peril. When we try and deny reality and escape from it – even if we are traumatised – we are left powerless. We miss that all of this has to do with the workings and power relations that define our everyday lives – the very workings and power relations of capitalism and state systems.

END_OF_DOCUMENT_TOKEN_TO_BE_REPLACED

Over the past 18 months Zabalaza Books has published over two dozen new publications or new editions of previous publications, all of which can be read online or downloaded in PDF format from the Zabalaza Books website.
Read the full list of titles and overviews of their contents, with links to the full texts, below.
END_OF_DOCUMENT_TOKEN_TO_BE_REPLACED
June 14, 2020June 14, 2020 ~ Sifuna Zonke

Hundreds of thousands of protesters have taken to the streets across the United States and beyond in response to the police killing of George Floyd. Protesters in Minneapolis, New York, Los Angeles and dozens of other cities demanding justice were met with extreme police violence, leading to more deaths and numerous injuries.

A common slogan heard at the protests is “No justice, no peace!,” raising the essential question of how a political system founded on a bloody history of white supremacy, capitalism and colonialism can ever provide true and meaningful justice. Some call for police reforms. Others call for the redistribution of funds. Still others argue that abolishing the police is the best option, but many people — even on the left — find it hard to imagine the viability of such a system.

END_OF_DOCUMENT_TOKEN_TO_BE_REPLACED

We repudiate the cowardly murder of George Floyd at the hands of Minneapolis’s police officers, another racist act in the heart of a world imperialist power. This event is added to the countless number of killings of people of colour and the Afro-descendent population in the United States which has been perpetuated since the days of slavery and hasn’t yet stopped.

Racism, a structural element in capitalist society, especially in North American capitalism, is unfortunately intact, but resistance and fighting spirit from people of color and poor people arises in response. Only solidarity and mutual aid will allow us to resist.
END_OF_DOCUMENT_TOKEN_TO_BE_REPLACED

Joint international analysis for 1st of May, 2020

”May Day should be a symbol of international solidarity – that is of a solidarity that is not limited to the frame of the national state, which always fits with the interests of the privileged minorities of that very country. Among the millions of workers who bear the yoke of slavery, there is a unity of interest, regardless of the language they speak and the standard under which they were born. But between the exploiters and the exploited of one country, there is a continuous war that cannot be resolved by any principle of authority and is rooted in the contradictory interests of the various classes. All nationalism is an ideological disguise of the true facts: it may at one time drag the great masses to its lying representatives, but it has never been able to abolish the brutal reality of the things of this world”
– (Rudolf Rocker, 1936).

END_OF_DOCUMENT_TOKEN_TO_BE_REPLACED

This is a lightly edited transcription of a talk given by Prof. Lucien van der Walt on a panel on the eve of the 2019 national elections in South Africa: the International Labour Research and Information Group (ILRIG)/ Workers World Media Productions (WWMP) Public Forum, Isivivana Centre, Khayelitsha, Cape Town, South Africa 25 April.

END_OF_DOCUMENT_TOKEN_TO_BE_REPLACED

Twenty-five years into democracy the black working class majority in South Africa has not experienced any meaningful improvements in its conditions. The apartheid legacy of unequal education, healthcare and housing and the super-exploitation of black workers continues under the ANC and is perpetuated by the neoliberal policies it has imposed.

The only force capable of changing this situation is the working class locally and internationally. Yet to do so, struggles need to come together, new forms of organisation appropriate to the context are needed; and they need both to be infused with a revolutionary progressive politics and to learn from the mistakes of the past.

Outside the ANC alliance, there have indeed been many efforts to unite struggles – but these have largely failed to resonate with the working class in struggle and form the basis of a new movement. Nowhere is this more evident than with the newly-formed Socialist Revolutionary Workers Party (SRWP) – which got less than 25 000 votes in the national elections, despite the fact that the union that conceived it, Numsa, claims nearly 400 000 members.

END_OF_DOCUMENT_TOKEN_TO_BE_REPLACED

For the past few years, most people would have come across news stories of how Kurdish fighters in Syria, especially women, have been crucial in battling the Islamic State of Iraq and Syria. Very few, however, would be aware that in the north and eastern parts of Syria these same Kurdish fighters are part of a revolution as progressive, profound and potentially as far-reaching as any in history.

In the north and eastern parts of Syria, an attempt to create an alternative system to hierarchical states, capitalism and patriarchy is underway and should it fully succeed it holds the potential to inspire the struggle for a better, more egalitarian Middle East, Africa, South Africa and indeed world. As in any revolution it has had its successes and shortcomings, but it is already an experiment worth reflecting on as it shows a far different world could be built to the extremely unequal and increasingly right-wing and authoritarian one that exists today.